WordPress 5.0 is slated to come out in the first half of 2018 and with it there will be significant changes on a number of fronts. Some long time users will be impressed with the modifications the WordPress team has made, but others are bound to be disappointed.

Whatever your opinion is ultimately, it’s important to be well-informed about these changes so you’re not blindsided.

As a business owner, web security should always be a top concern. Businesses with WordPress sites were particularly concerned in 2017 because there were security issues around REST API for plenty of users, particularly early in the year. Those issues could be one reason why WordPress has stepped up security functions for this latest version. To beef up security and awareness around best practices, WordPress 5.0 will recommend hosting with SSL certificates, two-factor authentication and other helpful ways to secure a site. These notifications will come early and often, giving users frequent opportunities to limit security liabilities on their sites.

Along with this improved security performance, the new version promises to make these features more easily accessible through simple to download plugins and instructions.

A Trend Toward SAAS

WordPress sites will begin to integrate more and more SAAS solutions to get the job done. This is a trend that will continue to evolve long past the release of version 5.0, but will ultimately make life easier for many users.

What would a WordPress with increased integration of SAAS look like? For starters, plugins will be automatically updated. Websites that accessed plugin data from the cloud, where it is managed by third party SAAS vendors, would also eat up less space on a user’s server and would likely perform more efficiently. Look for this trend to continue to ramp up even more in future versions of WordPress.

The flip side of these developments in the WordPress ecosystem is the fact that more plugin dev teams are launching their software as external SAAS products. Imagify from the WP Rocket Team and Blogvault Backup are two key examples. This trend will only speed up in WordPress 5.0 and beyond.

Perhaps the biggest innovation in WordPress 5.0 is the Gutenberg Editor. The WordPress team designed this editor to go toe to toe with competitors such as Wix and SquareSpace. It has a number of new features that are focused more on making design revisions easier. But for some people, dramatic change is not always a good thing. This editor has not been welcomed entirely with open arms by content professionals.

The use of blocks of content is one unique feature. Using the toolbar provided in version 5.0, users can move content around in chunks within their document. Say goodbye to copy, cut, and paste. In WordPress 5.0, it’s all blocks, all the time. For users of MailChimp, the block-based approach to text editing may seem familiar.

Many have complained that features like blocks and the overall layout of the new editor makes Gutenberg difficult to use because it’s not intuitive. Another complaint has been that Gutenberg has not been phased in as a plugin, but is being included out of the box with WordPress 5.0.

The fact that the editor has not been fully tested and is such a dramatic change is sure to ruffle more feathers moving forward. Users will have to install a separate plugin to disable Gutenberg if they prefer to revert to the earlier version of the editor.

Of course, as the new version rolls out and is integrated, users will also have to make sure that their favorite plugins and themes are compatible. It may take some time to get used to everything. 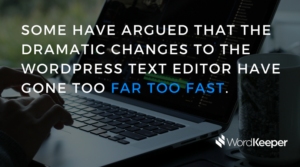 Some have argued that the dramatic changes to the WordPress text editor have gone too far too fast. Others reviewing the editor say that WordPress has overcompensated when responding to market pressures, making things more complicated than they needed to be.

Nowhere is WordPress 5.0’s improved mobile capabilities more clear than in Gutenberg. For instance, users will be able to use the Gutenberg editor from either a desktop or mobile device.

This will include more advanced editing and viewing options than have been offered in previous versions of WordPress.

Integrating WordPress 5.0 with Gutenberg may cause sites to break. To be more precise, users may experience some irregularities with the layout of text on their pages when they attempt to edit a post. If this occurs, it will happen the first time you attempt to edit a post after installing WordPress 5.0 with Gutenberg. Since the codebase for the editor is written in React as opposed to PHP, there may be some compatibility issues. If you think this may be the case with your site, it is best to enable the Classic Editor plugin and configure your site to revert to the old editor upon installation.

Integrating WordPress 5.0 with Gutenberg may cause sites to break.

Check back here for more updates as this new version of WordPress is rolled out and feel free to reach out if you have any questions. We look forward to hearing from you.

No Replies on What’s New in WordPress 5.0?